The Bonanza Property totals 227.02-hectares and is 100% owned by HAWKEYE, subject to a 2% NSR and a $2.00 per tonne royalty payment from the production of magnetite. The Property is located on the northern end of Vancouver Island, British Columbia, Canada and is situated approximately 110 kilometres northwest of Campbell River and 69 kilometres southeast of Port Hardy.

The Property encompasses the historical Bonanza Pit copper, gold, silver, zinc and magnetite skarn prospect, which has been subject to intermittent exploration over the years since its discovery in 1959.

The Property contains occurrences of high-grade copper mineralization within garnet and magnetite skarn lenses. One of these occurrences was open-pit mined in 1967 and is known as the Bonanza Pit (designated as Zone A), having produced 2,163 tonnes of ore, averaging 5.48% copper and 14.0 g/t silver. Mineralization 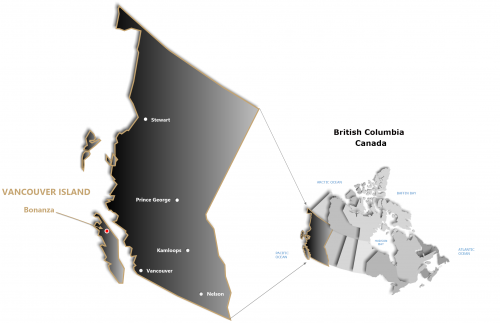 associated with the Bonanza Pit has been observed to occur intermittently over 2.5 kilometres along a northwest-striking hornblende quartz diorite contact, in five general zones, designated as Zone A through Zone D, and the TH Zone.

The Company has acquired the Property not only for its potential for copper, gold, silver and zinc skarn and porphyry mineralization, but also the potential for production of magnetite on the Property as a means of generating cash flow. Historically-estimated tonnages of up to “29,900 tonnes of 4.0% Cu and 10,000 tonnes of magnetite concentrate” reported on the Property in a 1961 report by Falconbridge will be further investigated as the primary target for the material. *

Magnetite is used to increase the density of regular concrete in the production of “heavy concrete”. This material commonly sees use as a weight coating for petroleum pipelines and for mitigation of radiation in nuclear and x-ray facilities. It is also an essential part of the “heavy media” process in coal refining, in which heavy impurities are removed with the aid of pulverized magnetite in a slurry. It is also used in water filtration and the production of various chemicals and metal paints. The Company primarily intends to target these concrete and coal markets.

Historical Exploration and Other Skarn Zones

Rock sampling from 1993 yielded a composite section near the Bonanza Pit which returned an average of 3.8% Cu over 5 metres, containing a 1.4 metre interval of 8.9% Cu and 0.242 g/t Au, while drilling carried out around the pit prior to mining encountered values up to 3.09 g/t Au, 3.05% Cu, and 60% magnetite. Geophysical work conducted in 1961 and 1962 suggests that the Bonanza Pit zone extends to the southeast at least 150 metres beyond the area which was mined in 1967.

Located about 400 metres southeast of the Bonanza Pit (Zone A), Zone B is a garnet-skarn horizon which dips moderately to the southwest with magnetite and associated chalcopyrite mineralization along the footwall up to two metres wide. Samples taken from this zone yielded up to 8.3% Cu in grab samples.

The main skarn zone at Zone C is developed at a limestone/volcanic contact, measures up to 5.5 metres wide and consists of roughly banded zones of clear to yellow garnet and magnetite with minor chalcopyrite. A chip sample of the volcanic rock returned a value of 3.02 g/t Au and 0.27% Cu, while a chip sample of the magnetite-chalcopyrite material contained 5.68 g/t Au and 2.23% Cu.

In 1976 Imperial Oil tested this zone with three diamond drill holes, but no geochemical results were reported by the company.

The highest gold values on the Property occur in this area. Diamond drilling carried out from 1960 to 1961 yielded copper values up to 5.66% over 1.5 metres, with results from 4 holes returning values greater than 2.56% Cu. One grab sample of a 1 metre zone of massive banded magnetite and chalcopyrite returned 100.44 g/t Au and 3.62% Cu. Another grab sample of oxidized chalcopyrite returned 30.82 g/t Au and 2.31% Cu.

The TH Zone, discovered in 2007, is a skarn showing limited to about 7 metres of exposure in a narrow creek bed. The creek, designated as the 0505 Discovery Creek, hosts a mineralized skarn zone of indeterminate extent. The main skarn alteration is hosted by a leucocratic gabbro rock unit. 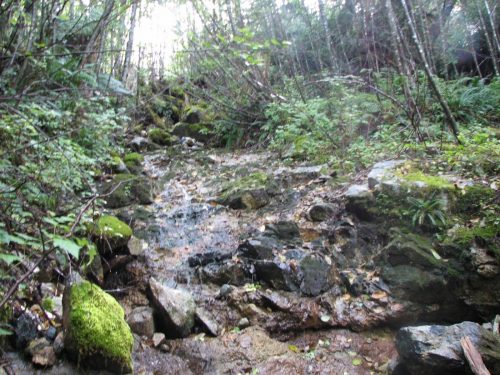 “Assay values referred to on this page have been referenced from historical programs. Values in these old reports have been verified by the Qualified Person, but there has not been any onsite data collection to confirm them. As such these values should be regarded as a guide only. “