Situated in the Yanks Peak Area of Barkerville Terrane, BC, Canada

HAWKEYE owns a 100% interest in the 1,405 hectare Swift River property (the “Property”), which is located approximately 17 kilometres south-southwest of the Town of Barkerville, BC, Canada. The Swift River property which is not subject to any net smelter royalty payments lies within the southeasterly-striking Snowshoe Group of the Barkerville terrane on a trend from Yanks Peak. The Property lies 5 km northwest of Barkerville Gold Mines’ (“BGM”), a subsidiary of Osisko Development Corp. (TSX.V: ODV) Yanks Peak claims, which hosts a 4.5 km long strong gold-in-soil anomaly that was outlined during their 2018 field program. This is the geological formation that hosts BGM’s and ODV’s current gold mine development and exploration projects.

Placer gold was discovered and mined in the Cariboo Valley area along a number of drainages including Keithley, Snowshoe, Simlock and Harveys Creeks starting in 1860. The town of Barkerville became established as the centre of the historic Cariboo gold rush following the 1861-1862 discoveries to the north on Lightning Creek, Williams Creek and the surrounding area. The recorded production estimate from 1861-1987

reported more than 5,000,000 ounces of gold which included 3,800,000 ounces from placer operations and 1,230,000 ounces from lode mining. Recently, ODV and BGM, the current principal property holder in the district, announced a significant resource definition on lode gold projects and large exploration programs focused along the NW to SE-directed high strain zones in the Barkerville Terrane.

Message from the President

Mr. Greg Neeld, President & CEO states, “HAWKEYE is eager to establish its portfolio of properties in the Barkerville-Cariboo gold district. The acquisitions place HAWKEYE in a historical mining centre continuously productive for more than 150 years and with recent exploration successes and ongoing mine development activity. The Company has purchased the Swift River property based on its favourable location and regional geological features. Osisko and BGM are in the permitting stage for a 4,750-tonne-per-day underground mine, with a feasibility study expected to be completed in 2021, which points to increased potential and opportunity within the prolific Barkerville-Cariboo gold district. HAWKEYE looks forward to executing exploration programs over its properties either independently or through the diversification of our property management strategy to also include a Prospect Generator (PG) model to attract industry peers to share in the exploration and development of our properties through earn in option (EIO) or joint venture (JV) partnerships.” 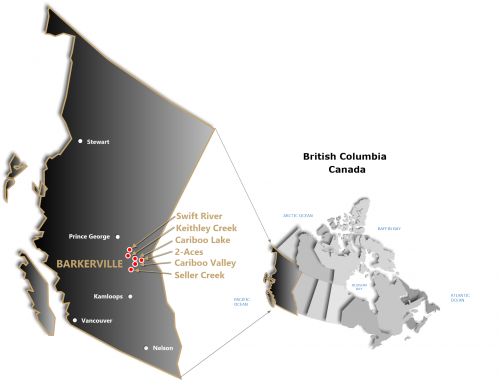 The Swift River property is situated near the western margin of the Barkerville Subterrane, a subset of the Kootenay Terrane, with which it shares many similarities. The Barkerville Subterrane consists of a late Proterozoic and/or Paleozoic sequence of continental shelf and slope deposits developed adjacent to the craton of Ancestral North America, and includes clastic sedimentary rocks along with lesser amounts of volcanic rocks and carbonates. It is structurally the lowest exposed stratigraphic sequence in the area and is characterized as being more deformed and metamorphosed (lower greenschist facies) than adjacent terranes.

Rocks of the Barkerville Subterrane were subjected to an early period of ductile deformation that resulted in a westward directed, asymmetrical folds that plunge shallowly to the northwest. Post metamorphic open folds with upright cleavage are superimposed on earlier structures. During Late Cretaceous to Early Tertiary time, the terrane was disrupted by northwest trending dextral strike-slip faults. Northwest- and north-trending faults, with an important normal component and generally apparent right lateral displacements, record extension, probably associated with transcurrent movement. The north striking cross faults are an important control for the gold-bearing vein systems within the Cariboo Gold Belt.

West of the property lies the Quesnel Terrane, which comprises an early Mesozoic island arc assemblage consisting of basaltic, andesitic, pyroclastic, volcaniclastic and greywacke rocks. The Quesnel Terrane has been thrust west to east onto the Barkerville Subterrane, along the Eureka Thrust Fault. To the east, the Cassiar Terrane, a late Proterozoic to Paleozoic sequence of continental shelf clastic and carbonate rocks have been thrust from east to west onto the Barkerville Subterrane along the Pleasant Valley Thrust Fault.

During 2018 HAWKEYE completed a 148 line kilometre helicopter-borne geophysical survey over the Swift River property performed by Geotech Airborne Geophysical Surveys Ltd. The survey which was carried out at 150 metre line spacing identified several features of interest on the Swift River property. Two prominent northwest-southeast and northeast-southwest trending linear magnetic lows cross the property. The northwest-trending structure is offset in the northern half of the property along a 2 km northeast trend, before continuing off the property. The offset may represent a secondary structure offsetting a regional fault, or perhaps a dilational jog along a dextral strike-slip fault. The second magnetic low feature cuts the central part of the property, and may represent a regional structure that extends to the Cariboo Break, and may be causative of the Cariboo Break offset.