Vancouver, British Columbia, Canada – HAWKEYE Gold & Diamond Inc. (the “Company” or “HAWKEYE”) (TSX.V-HAWK; Frankfurt Ticker: HGT; WKN: A12A61 ISIN: CA42016R3027): is pleased to announce results from its multi-phased 2022 ground-based work program over its 100% owned Swift River, Keithley Creek, Seller Creek, Cariboo Valley, 2 Aces West and 2 Aces East properties (the ”Properties”) which was performed during August 2022 (the “2022 work program” or “Exploration Program”). The Properties are a series of mineral tenures totaling approximately 20,835 hectares and are strategically located approximately 28 kilometres (“km”) southeast of the Town of Barkerville in the prolific Barkerville / Cariboo gold camp in central British Columbia (“BC”), Canada.  The Properties lies within the southeasterly-striking Snowshoe Group of the Barkerville Terrane which has been a major historical and recent exploration and mining focus.

The geological team was on site for a three-week period, starting on July 26th, 2022. The program was designed as a continuation of the 2021 prospecting and mapping campaign, with a focus on the Seller Creek, Cariboo Valley, Swift River, 2 Aces West and 2 Aces East properties. These properties are underlain by a series of Paleozoic rocks that locally host mineral showings related to ancient deep-sea volcanism and mineralization, and contain various geological structures that can act as fluid conduits and traps. Samples were analyzed in real time using an XRF gun which provides geochemical data that could then be immediately followed up in the field. Some of these samples have also been submitted to SGS Labs in Burnaby for full geochemical analysis to acquire additional information. The XRF device is an excellent guide in the field, but lab assaying techniques are more effective in analyzing elements such as gold and providing accurate values. The Company will issue a further release once these results have been received from the lab.

The Swift River Property is road accessible and recent logging has created new exposure in road cuts. In the central part of the property, several cuts have revealed sections of carbonaceous shales overlying sequences of volcanic sandstones within the Harvey’s Ridge Succession of rocks.  Along certain horizons in these black shales, veins and stockworks of carbonate or barite veins were common and introduced disseminated sulphide minerals.

A layer of carbonaceous shale was traced discontinuously along a 350-metre-long section of hillside. Within this, a 60-metre continuous roadside exposure offered an opportunity to study the layers and geochemistry in detail. A series of seven sections were logged, and each unit within that section was sampled. “SR-SS06” (see Figure 1) was one that hosted the most intensive veining which in turn is associated with elevated metal content (see Table 1), including barium (2,231 to 7,132 parts per million (“ppm”)), mercury (trace to 4.32 ppm), rubidium (22.6 to 142.6 ppm), and titanium (423.9 to 5,136.2 ppm). Other sections hosted fewer veins but continued to show elevated metals such as silver (trace to 6.62 ppm) in “SR-SS02”. Mineralization and the variety of metal content increased towards the volcanic sandstone unit which could be closer to the source of host fluids.

The carbonaceous shale unit is a prime target for follow up exploration. The geology suggests a seafloor volcanic setting where fluids would have carried dissolved metals into the water column before they condensed and settled out. These sedimentary exhalative deposits (“SedEx”) often form in clusters or stacked lenses, and the metals deposited are “zoned”. This road section appears to be distal from the source, but the information collected will aid in any targeting down-dip. 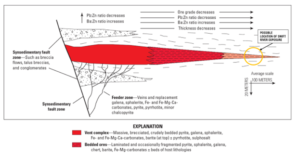 Figure 2: Cross section through a SedEx deposit (Modified from Lydon, 2004a)

Exploration at 2 Aces East during 2021 returned elevated gold values in stream sediments (up to 1.8 grams per tonne gold). The samples were collected from an isolated drainage that originated in a glacial cirque above the valley floor. The Company discovered significant alteration over a 400-meter-long silicified, resistive ridge of gossanous material. Samples collected from this ridge in 2022 returned anomalous mercury (trace to 4.95 ppm) from quartz veins. The altered ridge sits within the catchment area of the stream in which the 1.8g/t gold sample was discovered during our 2021 exploration campaign.

Although more work is required to fully understand the geological setting, the silicified nature of the ridge, the elevated mercury levels and the gold in stream sediment samples are consistent with the upper most levels of an epithermal system.

Based on these results, Hawkeye has expanded the 2 Aces East property eastwards, adding an additional 24.65 square kilometers of ground. This includes additional cirques that show geological similarities to the current one and three other prospective drainages.

The Seller Creek property is underlain by the Harvey’s Ridge Formation (part of the Cambrian-aged Snowshoe Group) which is a local focus for geochemical anomalies. This unit consists of a series of marine mudstone, siltstones, and sandstones that are folded into a northwest to southeast trending anticlinal feature, along the axis of which mineralization appears to be concentrated.

At Seller Creek, the anticline hosts anomalous levels of copper, mercury, molybdenum, and barium. The latter is significant as it is often associated with fluid transports into these ancient systems and can be used for targeting. An inlier of limestone at Seller Creek was also discovered and forms a skarn that is locally enriched in titanium, nickel, and molybdenum.

Two Aces West also hosts the Harvey’s Ridge Formation, and along the contact with the Downey Succession anomalous nickel, copper, titanium, zinc and lead values were found in quartz stockwork veins. This is in keeping with the regional trend of silver-hosting vein systems that have been historically discovered along the same contact.

Cariboo Valley hosts the Goose Peak Quartzite as its main underlying geology which has historically been devoid of mineralization. Work by the geological team in 2021 – 2022 also did not find any anomalous or continuous mineralization in these units. 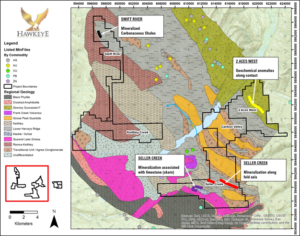 Mr. Greg Neeld, President & CEO of Hawkeye states, Hawkeye is pleased with the results of its 2022 multi-phased work program over its six Barkerville properties located in the prolific Barkerville / Cariboo gold camp in central BC, Canada. Hawkeye’s geology Team did an excellent job in narrowing down the target areas on our six Barkerville properties to four areas of focus for follow-up exploration. There is no doubt the geological setting of Hawkeye’s Swift River, 2 Aces West, 2 Aces East and Seller Creek properties are unique in in that we are looking at the potential for a critical metals and rare earth metals discovery. Critical metals are becoming more important to the world and for the sustainability for our future generations as the world transitions to the emerging Electric Vehicle market and Green Energy electrification of the planet. Hawkeye looks forward to the continuation of exploration and development of its Barkerville claims”

Samples collected in the field were first pulverized using a manual press to create a pulp sample. This was then loaded into a puck and placed into the XRF chamber. Each test used three beams, then the sample was removed, agitated, and tested again for a total of three times. The results presented are an average of the three tests which removes any outliers. A blank sample and a standard were also run every 25 tests for calibration.

Andy Randell, P.Geo., is the Company’s designated Qualified Person within the meaning of National Instrument 43-101 Standards of Disclosure for Mineral Projects (“NI 43-101”). Mr. Randell has prepared, reviewed, and validated that the technical information contained within this release is accurate.

HAWKEYE Gold & Diamond Inc. is a junior mineral exploration and development company based in Vancouver, British Columbia (BC), Canada. The Company’s properties are located in the world-class Barkerville gold camp situated in the historic Cariboo Mining District of central BC, and on Vancouver Island, BC, Canada. The Company owns four 2% royalty interests which are subject to buy-down provisions on the Railway, McBride, Boomerang and Todagin properties located in the prolific Golden Triangle of northwest BC. HAWKEYE’s corporate mandate is to build strong asset growth and shareholder value through the acquisition of low-cost, high-potential opportunities with discovery potential, and to manage its business in an environmentally responsible manner while contributing to the local community and economy.