Vancouver, British Columbia, Canada – HAWKEYE Gold & Diamond Inc. (the “Company” or “HAWKEYE”) (TSX.V-HAWK; Frankfurt Ticker: HGT; WKN: A12A61 ISIN: CA42016R3027): is pleased to announce results from its multi-phased 2021 ground-based work program conducted during September and October 2021 (the “2021 work program” or “Exploration Program”) over its 100% owned 2 Aces East property. The 2 Aces East property covers approximately 1,780 hectares (the “Property”) and is strategically located 32 kilometres southeast of the Town of Barkerville in the prolific Barkerville / Cariboo gold camp in central British Columbia (“BC”), Canada. The Property lies within the southeasterly-striking Snowshoe Group of the Barkerville Terrane. This is the geological formation that hosts Osisko Development’s (TSX.V, NYSE: ODV) current gold exploration and mine development projects, including Island Mountain, Cow Mountain and Bonanza Ledge.

The 2021 geological fieldwork provided ground truthing to the results of Geotech Ltd. airborne geophysical survey consisting of a 489-line kilometre, 150-metre spaced survey grid. A leading geophysics consulting firm processed the raw data and completed an overall interpretation including 3D inversion analysis for the 2018 airborne geophysical survey. Several new target anomalies were identified for exploration follow-up by our crew during the October 2021 work program. Early snow conditions limited access to some parts of the project area and those tasks will be continued in 2022.

Prior to commencement of the 2021 work program, Hawkeye completed a thorough review of the pertinent BC Government ARIS reports and discovered a number of historical soil sampling programs on the Property though none of which were subject to appropriate follow-up exploration. Assessment report 19327 (1989), included 1,028 soil samples across the central valley. Anomalous lead (“Pb”), zinc (“Zn”), copper (“Cu”) and silver (“Ag”) values were noted including samples that reported 2.8 ppm Ag, 95 ppm Cu, 1,130 ppm Pb and 13,700 ppm Zn. This area correlates with “Target A” as recognized within the 2021 geophysical interpretation of airborne magnetic data on the 2 Aces East claim (Fig. 1).

In addition, 736 soil samples were digitized from assessment report 21886 (1991) along the northern plateau within the claims. Samples reported anomalous Pb, Zn, and Ag including highlights of 1.4 ppm Ag, 739 ppm Pb, and 5,200 ppm Zn. This area corresponds with “Target B” on the 2021 geophysical interpretation of airborne magnetic data on the 2 Aces East claim (Fig. 1). Copper was not reported in the 1991 soil program which may have targeted regional Ag-Pb-Zn mineralization.

During the 2021 work program, Hawkeye’s geology team collected a total of 24 stream sediment samples across twelve sample sites along a variety of creeks flowing from the north and the south. Sieved and dried samples were sent to SGS Canada’s (“SGS”) accredited commercial analytical facilities in Burnaby, BC to be assayed for precious and base metals.

The stream sediment sampling highlighted a significant gold (“Au”) anomaly of 1,180 ppb Au from a stream running northeast from the ridges associated with the Three Ladies Mountain. This area has never been explored as part of the 2 Aces East claim package. Other anomalous results including 4,719 ppm Zn, 54.8 ppm Pb, 22.7 ppm Cu, 0.13 ppm Ag. Additional stream sediment sampling to focus on the gold anomaly is recommended.

In addition to the stream sediment sampling, the field crews collected a total of 13 rock samples that were also sent to SGS for geochemical analysis. These samples are anomalous for Cu, cobalt (Co), nickel (Ni), Pb, and Zn as follows:

The elevated copper, cobalt, and zinc values are associated with fault gouge material found within a steep gully, with disseminated chalcopyrite and pyrite observed in outcrop. 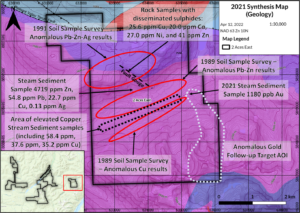 The Company is pleased with the positive results received from the 2021 work program over the 2 Aces East property. The data indicates a direct correlation of anomalous copper, cobalt, nickel, lead, zinc, gold and silver coincident with historic soil sampling, our 2021 rock sample and stream sediment trends and recently interpreted geophysical targets. 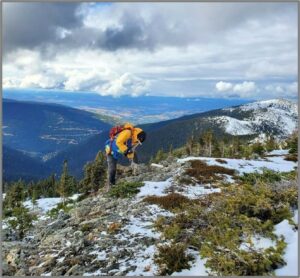 Barkerville was the centre of the historic Cariboo gold rush starting in 1860. The recorded production estimate from 1861-1987 reported more than 5,000,000 ounces of gold which included 3,800,000 ounces from placer operations and 1,230,000 ounces from lode mining.   Hawkeye’s six (6) Barkerville Properties are either contiguous or proximal to the southern boundary of the Osisko Development’s Cariboo Gold Project. Osisko Development recently announced a measured and indicated resource of 3.2 million ounces gold at 4.6 g/t and an inferred resource of 2.7 million ounces of gold at 3.9 g/t.

Andy Randell, P.Geo., is the Company’s designated Qualified Person within the meaning of National Instrument 43-101 Standards of Disclosure for Mineral Projects (“NI 43-101”). Mr. Randell has prepared, reviewed and validated that the technical information contained within this release is accurate.

HAWKEYE Gold & Diamond Inc. is a junior mineral exploration and development company based in Vancouver, British Columbia (BC), Canada. The Company’s precious and base metals properties are located in the prolific Golden Triangle of northwest BC, in the world-class Barkerville gold camp situated in the historic Cariboo Mining District of central BC, and on Vancouver Island, BC, Canada. HAWKEYE’s corporate mandate is to build strong asset growth and shareholder value through the acquisition of low-cost, high-potential opportunities with discovery potential, and to manage its business in an environmentally responsible manner while contributing to the local community and economy.